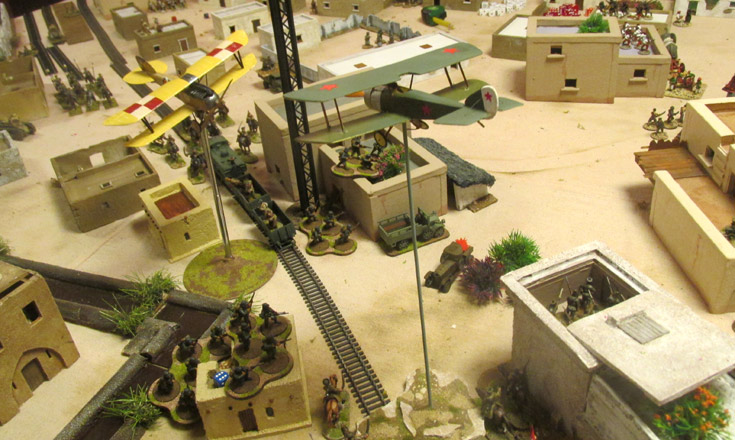 The Back of Beyond, Setting the East Ablaze!, 28mm

This rather crazy game – as most of our Back of Beyond ones are – was set in the city of Tashkent, during the Russian Civil War. For some reason the local Red garrison had been sent away by train to deal with a rising in neighbouring Samarkand. This was a little rash, as several hostile columns were moving on the city, intent on claiming it for themselves. This, frankly, was the rather thin excuse for a madcap multi-player game, with eight players fighting over the city.

We had a White contingent, and a Polish one, formed from former PoWs. A mercenary interventionist “Lithuanian” column appeared – again all  former German PoWs, as well as a British column, made up of troops from the Indian Raj. Two separate columns of Reds were trying to fight their way back into the city at the same time,  together with a Bokharan column, and another led by a Chinese warlord from nearby Kashgar. The town contained eight key buildings – the provincial palace, the armoury, the radio station etc., and players got extra points for seizing them. The also got points for wiping out rival units, and for occupying other buildings.

At the end of the game everyone got a playing card for each point – three for a key building. Aces were low, royals were worth five points, and the highest scorer won. Simple – sort of. The other house rule was that when someone entered a building they rolled a dice. On a “6” something good happened – like finding an LMG, or locals willing to help. On a “1” the reverse happened. A second “5-6” meant a unit of reinforcements appeared. During the game there were plenty of “1s” and “6s”, to add to the mayhem.

The game began with everyone appearing at their alloted entry point – eight of them surrounded the table. this, of course, meant that factions were appearing from every side of the town. The Bokharans made an early dive for the provincial palace, and ransacked it, before holding its walls against a half-hearted assault from the neighbouring Red faction. more serious was the cavalry clash in the square in front of the palace – Bokharan Guard Cossacks and Red Cavalry swirled and fought, and while the Reds were wiped out, the Cossacks were effectively a spent force.

Meanwhile the Chinese warlord’s troops were infiltrating the central square, spearheaded by an armoured car. It led a charmed life – it was fired on by red machine guns and a tank, but lived to tell the tale, although it was battered enough to force it to retire out of trouble. On the far side of the table the WEhites captured the town’s railway station, and then advanced up the track topwards the centre of the town. On their right was the Polish contingent, who formed a non-aggression pact with other neighbouring pro-tsarist factions – the Whites and the British. So, that meant that all three had a relatively untroubled game.

Actually, this wasn’t exactly true for the British. They searched the main mosque, and advanced on the police station without incident. But searching a random house led to a “1”, and the appearance of a unit of 20 pissed-off locals, armed with rifles. The local Imam was having a prayer meeting in his house near the mosque, and fortunately happened to had crates of rifles in his cellar. The British spent a few turns trading shots with this lot, and even called up their armoured car to add its weight of fire. A Sikh detachment was sent in to the assault, but after a bruising melee they were forced back. After that the British ringed it with troops, and bypassed this little nest as they continued their advance further into the town.

Next to them were the “Lithuanians” – Germans really. They too formed a non-aggression pact with the British, and reserved their powder for a sneaky attack on the Reds. Their ambush wiped out a unit of Red cavalry, but they found themselves cornered by the Red tank, and unable to advance further – beyond the drainage ditch that bordered their part of town. Back in the main square the Reds continued to have a hard time. The Chinese occupied the armoury, and one of the red players sent in a squad, not realising it was already occupied – by machete-wielding “do or die” fanatics. the result was a short, sharp melee that didn’t end well for the Reds.

By now we were coming to the climax of the game., A Polish plane appeared, and began straffing what remained of the Red cavalry – assisted by that Chinese armoured car. So, a Red plane came to the rescue. A dogfight ensued, which ended with the Red’s Sopwith being winged, and forced to limp off the table, trailing smoke. That was when the Whites played their hand. A few turns ago they received a unit of reinforcements – an unarmoured train with a unit of infantry on board. It advanced down the track towards the centre of the town. Then, on what proved to be the penultimate turn it speeded up and rammed the Red tank. The tank wasn’t actually on the tracks, but the port sponson of the Mark IV hermaphrodite was, and that was enough of a target.

The resulting collision derailed the train, and wrecked the tank. Amazingly the White infantrymen survived the clash, and stormed a nearby building, held by one of the Red Army commanders. Although the melee proved inconclusive – a unit of Red infantry were also hidden in the building –  you had to admire the foolhardiness of the action. So, that’s roughly where the game ended. the Reds had taken a real hammering, and were nowhere in the town-grabbing stakes. The totals were added up, and it turned out the winner were the Lithuanians, by a few points, followed by the Poles, and then the Chinese. All in all it was a terrific game – chaotic, noisy and great fun. That, of course, is what makes the Back of Beyond such a great period!