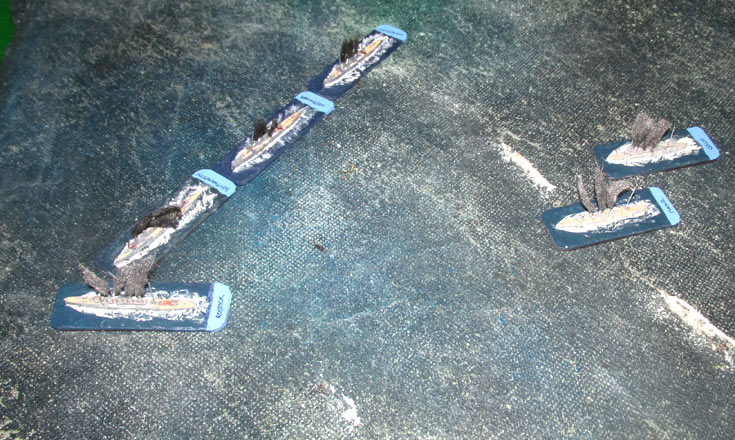 This little game was something a bit different – a game where none of the ships had big guns, and none of them had gun turrets. The war began late in the evening of 4th August, and the following morning, shortly after dawn, the German minelayer Königin Luise (below) appeared off the coach of Harwich. She was a passenger ferry, which had been hurried converted and sent to sea. She was spotted by British warships, but they thought she was the Harwich ferry – she was still in her civilian livery. it was only a little later, when a fishing boat reported she was dropping things off her stern that two destroyers were sent to investigate. That’s where our game begins – the moment the British destroyers Lance and Landrail spot the minelayer, and give chase.

In this game, Bart commanded the destroyers (soon reinforced by Laurel and Lydiard), Dougie their flotilla leader – the scout cruiser Amphion – and Campbell had the reinforcements – Commodore Goodenough’s light cruisers Southampton, Nottingham and Lowestoft. For the Germans, “New Michael” commanded the minelayer and the covering force of five destroyers (V-188, V-189, V-190, V-191 and G-197), while “German Michael” took charge of the three German light cruisers Köln, Mainz and Rostock. The game began with just the two initial destroyers plus the German minelayer on the table – everyone else appeared as the game progressed.

The first of these reinforcements was the Amphion, and she Bart’s destroyers began overhauling the minelayer, and eventually getting to within gun range (8,000 yards, or 80″). The Königin Luise spent a few more turns laying mines before clearing off at top speed, and at one stage Bart’s two leading destroyers ran into the minefield. Amazingly they didn’t hit anything. By now the largely unarmed minelayer was getting pummeled, and a fire broke out on her mine deck. She was in a bad way, and no sooner had Michael put the flames out than she was hit again, and the flames began licking along her mine deck. In the end she was sunk by gunfire from Bart’s destroyers, which frankly avoided a huge explosion as her mines went up.

Now the attention turned to the German destroyers and light cruisers, which had rather belatedly turned up to rescue the minelayer. First into action were the destroyers. both sides launched torpedoes at each other, and soon the North Sea was being criss-crossed by “fish” hurtling in the general direction of the enemy. the way this works in Fleet Action Imminent is that the player puts down an arrow-headed post-it sticker, which is about 1/4″ across. This points in the direction he wants the torpedoes to go. This marker gets covered by a piece of card until after everyone has moved. then the torpedoes start their journey. As this was most people’s first time launching them no hits were scored, but the Amphion came close – actually contacting a German destroyer. However, Dougie rolled badly when it came to the h”to hit” test, and the torpedoes missed.

Of course, they were also blasting away at each other with their guns, and a few boats were hit. On the British side all four destroyers had “engineering hits” – a shell went through a boiler or turbine – so the boats were reduced to half speed. two of them – Lydiard and Lance – actually had their engines hit again, leaving both boats dead in the water. In the German flotilla V-191 and G-197 both had similar “engineering hits”, while V-191 was sunk. In other words, while both sides were badly battered, only the Germans lost a boat.

The other clash was between the two squadrons of cruisers – three ships apiece. At first Campbell held his range – after all, he had 6-inch guns rather than 4.1-inch ones, which meant he outgunned the Germans. That though, wasn’t really Campbell’s style, so every turn he edged a little closer. Both sides tried unsuccessfully to hit their opponents with torpedoes, but the British were also scoring quite a healthy crop of hits on the German cruisers, without taking much damage back. German Michael’s dice rolling was pretty poor that night. In the end the Germans turned away, but then inexplicably turned back, until both sides were at point-blank range., true to form, Campbell’s flagship Southampton rammed the Rostock, inflicting a fair bit of damage on her – and some on herself. German Michael’s flagship the Köln was also pretty battered, having all of her port-side guns knocked out.

That was when the dice decided a squall roared in, reducing visibility to next to nothing. there had been a few of these before, but this one effectively ended the game. So, the final tally was that the British hadn’t lost any ships, while the Germans headed home, leaving both the Königin Luise and the V-191 behind them. So, the game was deemed a British victory, although the rather messy, chaotic scrap had been hard-fought, with both sides trading heavy blows. The rules worked well, and survived the testbed of players who hadn’t played a naval game before. All in all it was a good little scrap – and was all the more enjoyable because nobody had any “death star” ships – just light forces. It certainly whetted our appetites for more of the Great War at Sea.

More Stories From The Great War at Sea