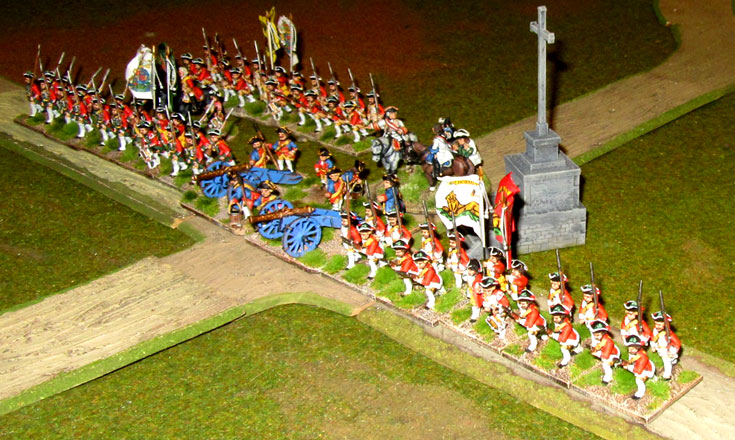 This week we were off to High Germany, for our first proper playtest of Die Kriegskunst 2, or Son of Kriegskunst, or whatever we’re going to call it. Essentially the rules are a modified version of Dave Brown’s General d’Armee, with a lot of the original Die Kriegskunst thrown into the pot. Although the rules keep evolving, and we’re trying out different things every time we play a game, the basic system is gradually coming together. So, it’s time to see if it works. This week the battle was fought largely to work out if we’d got the firing system right, and to get people used to the Staff orders system. It was a clash between the French and the Western Allies, fought out around the particularly bleak road junction of Wildnis Kreuzung (Wilderness Crossroads).

The Western Allied army consisted of six infantry battalions, six cavalry squadrons and a gun battery. The whole army was Hanovarian, apart from three battalions – two of which were Hessian and one British). This force was divided into three brigades-  two of infantry and one of cavalry. Their job was to hold the key crossroads, while the rest of their army march forward in support. The French were there to dislodge them, and to seize the crossroads for themselves. Incidentally the crossroads was marked by a marvelous stone roadside cross, produced by Michael Scott of Supreme Littleness Designs.

The French also had two infantry and one cavalry brigades to play with, but their force was slightly larger – eight infantry battalions and eight squadrons, plus a gun battery. Michael, Michael and Michael commanded the Allies between them (we had some fun with that one), while Campbell and Peter took charge of the French. I did my level best to play the part of the impartial umpire and rules supremo, and as all the figures were mine, I really didn’t have a bias for one side or the other. Well, perhaps a little. Allez les Bleux!

The game began with the Allies forming up into some semblance of a neat line, with their guns in the centre. German Michael kept failing his brigade activation rolls, so his Anglo-Hessian brigade spent the first three turns rated as “Hesitant”. As he wasn’t doing much other than defending though, this probably didn’t matter. MDF Michael was a little more adventurous with his cavalry though, advancing on the right of the Allied line, to confront his French counterparts, which were moving forward along the edge of the North Woods. Campbell had two more squadrons, but while both of Michael’s regiments (the Breidenbach Dragoons and the von Grothaus cavalry) were rated “battle cavalry”, Campbell’s mounted brigade was more of a mixed bag. The Dauphin cavalry were rated Veteran “battle cavalry”, Chabrillan were line “battle cavalry”, and the La Reine Dragoons were slightly inferior, and rated as “campaign cavalry”. This was really to see what difference the various ratings might have on the coming fight.

Both sides seemed a little reluctant to get stuck in, but when Campbell’s brigade failed their brigade activation and became “Hesitant”, Michael seized his chance. The four squadrons of the Breidenbach Dragoons charged their red-coated counterparts in the La Reine regiment, and gave them a fairly rough handling. The melee ended with the French dragoons in retreat. The von Grothaus regiment moved up to do its bit, and took aim at the Dauphin regiment, which had been the sole target of the Hanovarian guns as the French army advanced across the table. For the moment though we’ll leave the cavalry, to see how the infantry clash was developing. T

he Hanovarian brigade at the crossroads had stood its ground, its line centred on its accompanying gun battery, while to its left, German Michael’s brigade was starting to move – erratically. Its units moved sideways a bit, then back again, while the sole British battalion actually advanced into the South Wood, on the edge of the table. The reason was that the French advance had come close enough to pose something of a threat. The French guns had unlimbered when they got into effective range, and began pounding away at the Hessian Leibregiment. To the left of the guns Campbell’s infantry brigade – two battalions each of the La Mark and Conde regiments – were deploying from column of march into column of line. In Kriegskunst this involves turning sideways to the enemy, so Campbell wisely did this before his men got within effective range of the enemy guns!

Behind the guns Peter’s brigade (two battalions of Touraine, and one each of the Tournaisis regiment and Dillon’s Irish) began deploying in support of them, ready to advance on the Hessians, the troops skirting the edge of the South Wood.  That explained why Michael’s British 25th Foot had advanced into the woods – to protect the flank of the Hessians – but there were too many enemy troops around, so in the end he withdrew, shadowed through the trees by the Irishmen from Dillon’s. It was now clear though, that Peter was going to rely on firepower to win the day – his guns were doing all the fighting, and his infantry were really just there to support them with long-range musketry.

Meanwhile, there were developments over in the cavalry battle being fought near the North Woods. First, Von Grothaus had charged the Dauphin Regiment, and routed it from the table. It was now free to choose another target, but with not around it swung round to threaten the flank of Campbell’s infantry, which were now approaching the crossroads. behind them, the Breidenbach dragoons had charged the Chabrillan regiment, and forced it to retire. However, thanks to another bout of nifty die-rolling Campbell not only rallied both the remaining French cavalry, but the Chabrillans charged the Hanovarian dragoons, and forced them into retreat.  This cavalry clash had been a real yo-yo affair, and a hard-fought one, but it now looked as if the French were gradually gaining the upper hand.

Back at the crossroads though, Campbell’s infantry charged home, with a battalion of Conde regiment on the left, fighting the von Wangenheim regiment, while on their left the blue-coated Germans of the La Mark regiment took on von Diepenbroik’s men. Both French regiments were supported by their second battalions, while in the Hanovarian ranks the only available support came from the Jung Zastrow regiment in reserve – and the guns. After a couple of hard-fought melees the Conde regiment drove their German opponents back, while La Mark eventually pulled back a little, as both sides decided to resolve the issue using musketry.

Unfortunately that’s where we finished the game. As a playtest the aim was to try things out, and to introduce five players to the new-look rules, but the game actually turned out to be a real hum-dinger, and there was still everything to play for. The rules – despite a few page-turning moments – worked well, and the players soon picked up the game’s rhythm, which was dictated in no small part by the allocation of Staff Officers, by Initiative, and by the propensity of brigades to go “Hesitant” at key moments! So, for me it’s back to the rules tinkering, but we’ll fight another battle soon, and so the struggle between La Belle France and her Germanic neighbours will continue.