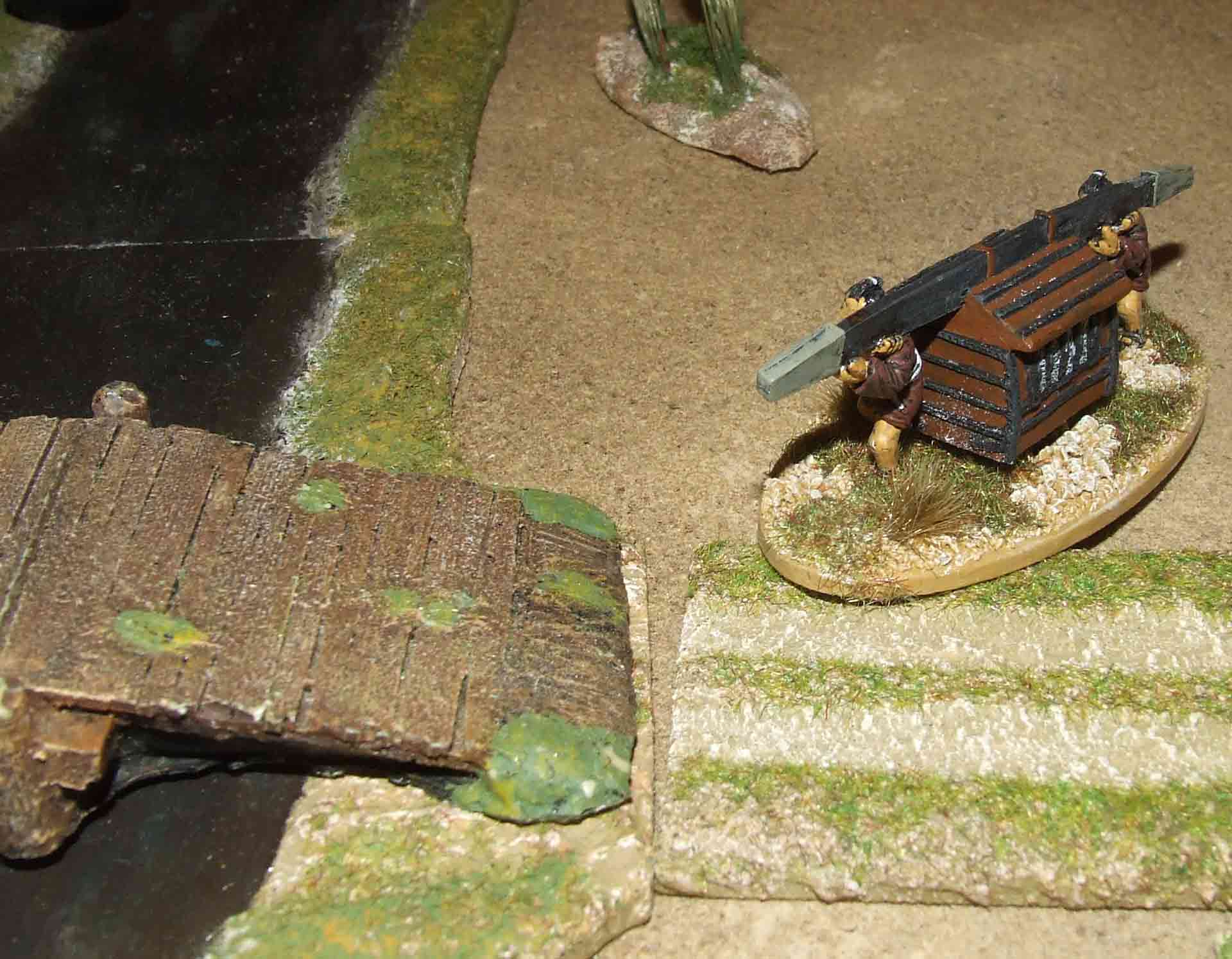 Samurai aren’t really my thing. First of all, I find all those outfits they wear just plain silly. Then there’s the names they have for everything, which I can never remember, and their crazy clan banners. There’s a lot of hokum with it too – all that fake Monkey and Seven Samurai dialogue – like the name of these rules for example. Nope – it’s not really my bag. Also, I usually find skirmish games profoundly unsatisfying. Sure, you get to use nicely-painted figures (at least some of the time), and in theory a modicum of tactics are involved, but it really isn’t the same as a proper wargame. Frankly I’d sooner sit in the club bar and drink.

However,  I was cajoled into taking part in this little skirmish, and against my better judgement I found myself rather enjoying it. I found myself enjoying it about halfway through. Perhaps I just resigned myself to it all, although I suspect it also had something to with the number of beers consumed, that I was eating “in period” (above), and the fact that I got to chop up Dougie Trail’s Samurai…

The scenario – such as it was – was dreamed up by Derek Hodge (pictured below with Jim Louttit) Apparently it all involved an aristocratic lady in a palanquin, carried by two hefty bearers. She was the daughter of the chief of the Toshiba clan, and as we all know Medieval Japan was a battleground for warring Samurai clans. Well, she had an escort, and had to reach the safety of a bridge. Beyond the river was friendly territory – or at least the domain of an ally. the ally’s troops wouldn’t do anything to help her, but were out in force to prevent the fighting from spreading to their side of the river. To reach the river she had to be carried through an area ruled by the rival Sony clan, and their people were eager to capture her.

Fortunately the lady had an escort of samurai and ashigaru, so at least the bodyguard could try to fight their way through if – or rather when – they were set upon. Well, the escort sound found its way to the bridge was blocked by their rivals – a smaller force than their own (run by Kevan Gunn). They also saw that enemy reinforcements were arriving (my guys), and so they resolved to hack their way through the blocking force before the other guys could reach the scene.

To buy time, the escort leaders (Jim Louttit and Dougie Trail) sent two samurai to keep the reinforcements busy, while the rest piled on down the road towards the waiting enemy. The two samurai chopped up two or three ashigaru, but weight of numbers finally prevailed, and they went down fighting. Their sacrifice wasn’t in vain – they bought time for the rest of the escort to weigh in to the blocking force, and overwhelm it after a sharp and rather scrappy fight. Meanwhile the palanquin bearers skirted round the mayhem, and headed towards the bridge.

Seeing this, the reinforcements gave chase, but had to waste time dispatching a few surviving members of the escort before they could catch their quarry. In the end the palanquin reached the bridge safely, although most of her escort were left strewn all over the countryside. Victory then, was awarded to the Toshibas, and the toys were packed away.

These Songs of Ninja and Katana rules proved to be a rather generic skirmish set, derived from a set of Italian fantasy rules called Song of Blades and Heroes. The names alone are enough to send me heading for the hills. While this isn’t where I’d normally look for a set of wargame rules, it seemed to do the job reasonably well. Fortunately we were spared the appearance of any mythical Japanese dragons, demons trolls or other such fantastic nonsense. Perhaps it was just as well.