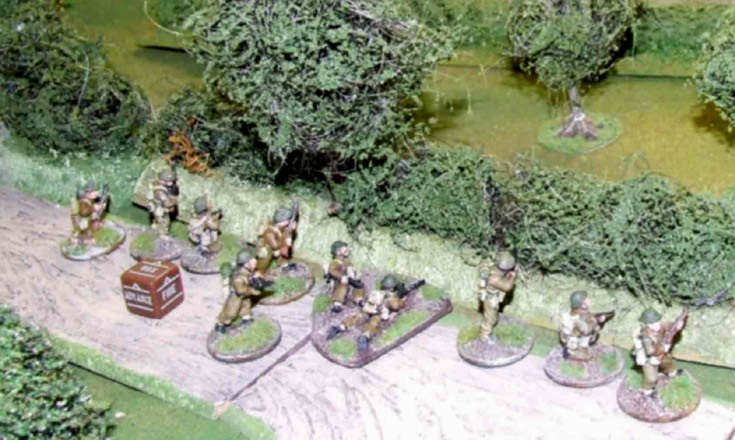 Like last week’s encounter, this little skirmish game was played out using the Bolt Action rules. When I first came across them I wasn’t too keen on them, as they had a lot of quirks in them. However, on re-reading them and after playing a few games I’ve discovered these problems tend to be come into play when artillery or armour is used. The basic infantry rules are pretty sound, and very straightforward. Despite their quirks they also have the advantage of being quick and simple, which is exactly what I need on a gaming night at the club, where time is at a premium. We can’t start before 7pm, and have to be packed away by 10pm, so that doesn’t leave more than 2 1/2 hours of gaming time. However, a game using Bolt Action can easily be played to a conclusion in that time.

This was an encounter game, and for once we “pointed it up”, with both sides having 1,000 points. The British had four sections, rated as “regular”, backed up by a few support weapons and a Sherman, while the Huns had three squads of “veterans”, supported by an MMG and a Stug III. The game began with both AFVs moving forward down a little bocage-lined lane, and then stopping to fire at each other. Against all the odds this encounter lasted all game, and it finished with both vehicles still in play. The Sherman had been hit but its armour hadn’t been penetrated, while the Stug had been set on fire, but the flames were soon put out. The difference though, was that by the end of the game the Stug was carrying five “pebbles” on its back – they’re what we use as pin markers. This made it very hard for the German player (Chris Werb) to give his assault gun commander orders, or to hit something he fired its gun at.

Elsewhere on the table the rival infantry units advanced a little, but tended to line bocage hedges and fire at the enemy, rather than make any sweeping advance across the open fields or orchards that separated the two battle lines. The exception was on the British right wing, where two sections were able to gang up on a single German one. At first the firepower from the German unit caused real problems – it had two LMGs, and each German one gains an extra dice for firing. Fortunately for me my British spotter managed to zero in my attached mortar, and rounds began falling on the German position. To spice things up even more my FOO called in an artillery fire mission on the assault gun which landed on target, but also hit the German squad which was within 6″ of my firing point. While no casualties were inflicted, both the Stug and the German squad took a pile of pin markers, which really reduced their effectiveness for the rest of the game.

This allowed me to bring my two rifle sections into play, and together with the mortar they managed to wipe out the enemy squad on the final turn of the game. Over on the British left both sides had two squads/sections in play, but in the firefight the Germans had the upper hand, having more automatic weapons – and therefore more dice to throw. By now my PIAT team had moved up and was firing at the Stug – again with no effect. However, it was clear that the German flank was now in tatters, and as my infantry began moving forward we decided to call it a day.

Surprisingly, casualties were relatively light – around 9 British figures and 14 German ones became casualties, despite all the firing going on. Like I said before the game worked well, and fairly sped along. Still, I’d be tempted to look at the tank rules again – it seemed crazy that two tanks a few hundred feet apart couldn’t hit each other. I’d also like to replace the mortar “stonk” with a template, rather than have it hit a single unit. I’m sure we could easily tinker a little and the game would still work, but we’ll persevere with the written rules for a few more games, just to see if they grow on us. I’m certainly more pro Bolt Action than I used to be, and I think they give a more straightforward game than Rules of Engagement, and they’re certainly a lot more playable than Disposable Heroes, which I’ve always found needlessly clunky. However, they are ludicrously over-simplified, and you can drive a coach and tiger tank through the holes in the system. For now though, they’ll work until something better comes along.