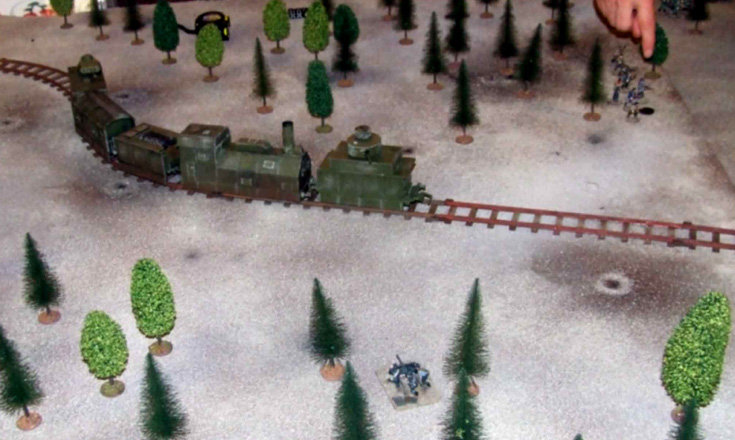 I popped into the Edinburgh club for the first time in ages – I spend most of my summer in Orkney. There were several good-looking games in progress, including a 10mm Vietnam one, a 15mm Second World War encounter, and a 28mm American War of Independence battle, as well as the usual fantasy nonsense. However, I was invited to join in a Second World War skirmish, an affair using Russian partisans, and using Bolt Action. The idea was, there were two partisan groups in the area, both undersized platoons, and both had been ordered to blow up a railway. In addition the second group also had a personal score to settle with Col. Klink, the local German commander, and classed it as a win if they killed him during the game. In fact it was my Sverdlov group who almost achieved this. We ambushed a column of German trucks as it approached a hamlet which lay astride the railway. We caused several casualties, and got off lightly in the ensuing firefight, as the accompanying German armoured car failed to hit anything over several turns! The ambush was carried out by half my force – the rest headed onto the railway tracks to place their charges.

This was something of a race against time, as a German armoured train suddenly appeared. Fortunately it halted to disgorge troops, all because Bill Gilchrist’s partisans of the Kovpak group had a 45mm anti-tank gun, which they used to fire at the train. This soon developed into a battle which the partisans were unlikely to win. Still, they managed to knock out the train’s rear gun carriage, and inflicted heavy casualties on the advancing Germans. One partisan squad found itself on the unengaged side of the train, and ran towards the hamlet, in an attempt to seize Col. Klink. That little foray didn’t end well, as the partisans soon found themselves surrounded, and were soon wiped out once the armoured car commander reclaimed his “lucky dice”.

That was when I blew up the railway track. Whatever happened from then on the Germans would be the losers. Actually almost anything – unbeknownst to me the Germans had a turncoat Ukrainian detachment in their platoon, and it included two Red Army infiltrators. I’m afraid I shot them down along with their companions, which meant we’d just lost a potential ally within range of Klink’s command post.

Still, my job was done, and my men slinked back into the woods, having suffered three casualties during the game, and having inflicted about four times that on the enemy. The last of my units to see action was my attached anti-tank rifle, which I used as a glorified sniping rifle to shoot at the Germans hiding in the hamlet. On the far side of the table Bill wasn’t having such a good time of it. his anti-tank gun was overrun, and what remained of his partisan group was soon fighting a rearguard action as it pulled back into the forests. I could have gone to his rescue, but what the heck – it wasn’t my partisan group! His men were facing an armoured train, an armoured car, and three times their number of Germans. In the end the battered remnants of the Kovpak group limped off the table, leaving about 16 dead on the table – about three quarters of their starting force.

Still, they caused almost as many casualties on the enemy, and overall the Germans suffered the worst of the battle. While Col. Klink survived to fight another day, his failure to stop the partisans blowing up the railway track wouldn’t play well in Berlin. If he wasn’t already there he’d probably be sent to the Eastern Front… The game was played out using Bolt Action, with Bill’s slight addition – two red dice in the cup. When the second one was pulled out the game turn came to an end. That means that you couldn’t guarantee you’d always get to fire each turn, and it added an nice element of uncertainty to the proceedings.