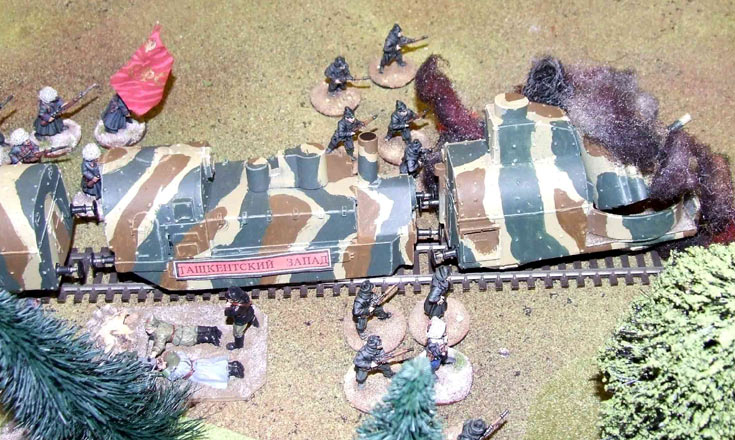 This game had everything – armoured trains, British gunboats, submarines, tanks, armoured cars, biplanes and flamethrowers. In other words no early 20th century wargaming cliché was left unexplored! The loose premise involved a Bolshevik attack on the newly-autonomous state of Livonia, which was defended by a motley collection of German Freikorps, Livonian nationalists (with a tank), and the Royal Navy. Oh, and the British commander was a Lt. Col. Alexander – later Field Marshal Alexander of Second World War fame.

Both sides were attempting to capture the small Baltic port of Kolka, which rather inexplicably was also sheltering a Soviet submarine. While a naval signalling party directed naval gunfire from the British gunboat, the German Freikorps entered the village from one side, and the Red army entered it from the other. Inevitably the game became dominated by some hard-fought house-to-house fighting, where the German flamethrowers came into their own.

Meanwhile a Red armoured train appeared (operated by Dave Marks), only to be knocked out by a lucky field gun shell, fired by Dave’s son Sam! Father and son were soon engaged in their own private war, which eventually saw Dave’s Cheka driven off by Sam’s sub-machine gun toting Freikorps.

Both sides also had armour – the Bolsheviks had an armoured car, while the Nationalists had a lumbering British tank, with a Livonian crew. Neither did much apart from trading shots with each other throughout the game. In the end the umpire (Colin Jack) declared the game to be a marginal victory for the Livonian Nationalists and their allies.

In truth both sides had really fought each other to a standstill. What was particularly enjoyable about this game (apart from the great range of toys on display) was the fact that everyone entered into the spirit of it, including Team Marks – up from London for the day – who seemed to enjoy shooting it out between themselves!

I’ve said it before – Chris Peers’ Back of Beyond games are always great fun, and they make this period a real joy to game.