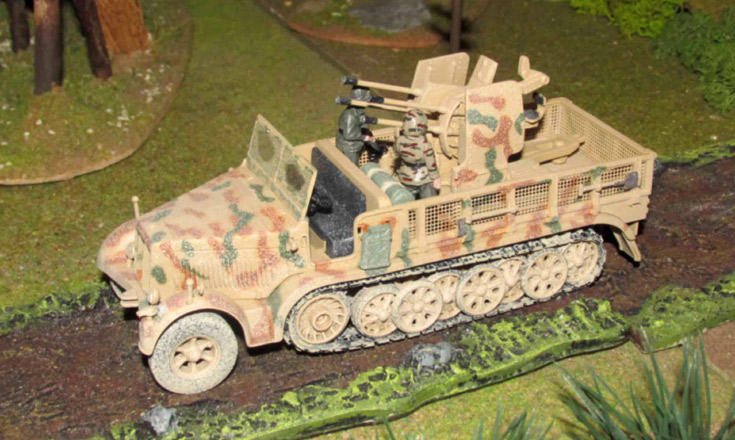 This was the third D-Day game fought out on the same table. The last time I played it was mid-January, and the Allies just about managed to fight their way off the beach. When I left it the leading Allied unit was the Sherman called “Milly”, who had bypassed the German coastal bunkers and was heading inland to support the Polish paratroops. I missed out the game a fortnight later as I was up in Orkney, but I was back for this one – the third and final instalment of the fight for the fictitious Jupiter Beach. It turns out that in my absence the Allied had advanced another foot across the table. Apparently they had trouble dealing with the coastal bunkers, and clearing the Germans from a farm which lay between the beach and the village of St. Felix-sur-Mer. However, they’d also neutralised the artillery battery on the ridge at the far end of the 20×6 foot table – a rather useful development. Both sides had brought in reinforcements  during the second game, and the beach was now secure.

So, in this game, all the Allies had to do was to fend off a German armoured counter-attack, mop up the numerous little pockets of resistance, and then make a drive for the ridge. Simple. Unfortunately things don’t always pan out the way you’d like. A long-running duel between a Cromwell and a Stug III pretty much blocked the main road leading inland for much of the game, while the Polish paras in the village were having a really hard time holding on. It was clearly time to send in the cavalry – or in this case Milly.

Actually, before Milly did her thing our air cover arrived. I brought along my 1/48 scale Typhoon – that’s it swooping over the table in the picture above. On its first pass it fired at a German flak half-track, and knocked it out. So,, safe from ground fire the Typhoon made another few passes, firing into the Germans attacking the village, and trying (but failing) to blow up a German tank – actually an old French Somua pressed into service with the Wehrmacht. That sortie over, it was time for Milly to do her thing. She clambered onto a low hill in front of the village, and opened up on one of the three Somuas supporting the German counter-attack on St. Felix. Although she didn’t brew her up she damaged her and sent her scuttling back. That gave the paratroopers a little breathing space. Then she fired at the Stug, even though it was a pretty long shot. Surprisingly she brewed her up  – thanks to some really good die rolling. That let the Allies advance up the road again. This advance soon came to a temporary halt again when the M10 tank destroyers which lead the advance was destroyed by a German panzershreck team lurking in the hedgerows. Still, there were plenty of infantry supporting the attack, and the tank hunters soon paid for their temerity.

The scene of the fighting switched back to the village for a bit. The Poles were barely hanging on, as the German counter-attackers captured the village church, and pushed the paratroopers back into a little corner of the village. The British players raced a truck forward filled with British infantry, but it was hit by a lucky mortar shot just as it reached the village. More mortar rounds then destroyed the paratrooper’s mortar, and their machine gun. That’s when Milly came to the rescue. First, she knocked out the Somua she’d damaged earlier. Then when another Somua appeared she knocked that out too. This gave the British players a morale boost, and two Shermans raced into the town.

One was fired at and pinned by a panzerfaust team, which was killed in turn by the British who had just debussed from their burning truck. Then in their turn they were counter-attacked by Germans, who were attacked in their stead by the second Shermans, whose hull machine gunner had a field day shooting Germans in the open. That little fracas pretty much stopped any German attack on the town, and with their reinforcements the paras were set to drive the last pocket of Germans out of the church – their lost toehold in the village. Over on the Allied right flank things were going well too. The panzerfaust team and a supporting group of German infantry were silenced, and the advance of the Allied armour resumed. One Cromwell managed to knock out the last remaining German-run Somua – which also happened to be their last tank on the table. The German commander rolled some pretty dreadful “calling for reinforcements” dice, and so the panzers stayed off the table until the end of the game.

The only bright spot for the Germans was in the centre, where couple of machine gun nests had held up the advance of the Royal Marine commandos for most of the game. Instead the commandos filtered into the village, to add their weight to the Allied troops surrounding the church. That was pretty much where the game drew to a close. it was way past our collective bedtimes, and so the umpire – Colin Jack – did a quick survey of the table. While the Germans still had a few pockets of troops left, there wasn’t really anything which could stop the Allied tans from sweeping onto the ridge and off the table. So, victory in this long and hard-fought game was awarded to the Allies.

The hero of the evening though was Milly – with three German AFVs to her credit she did more than most to win that victory. One of the German players even said he’d look out for her in future games, and get his revenge – a sure sign Milly was doing her bit to discomfit the evil Hun!  The rules we used were Bolt Action – not my favourite  WW2 skirmish set, but they did give a simple and enjoyable game.