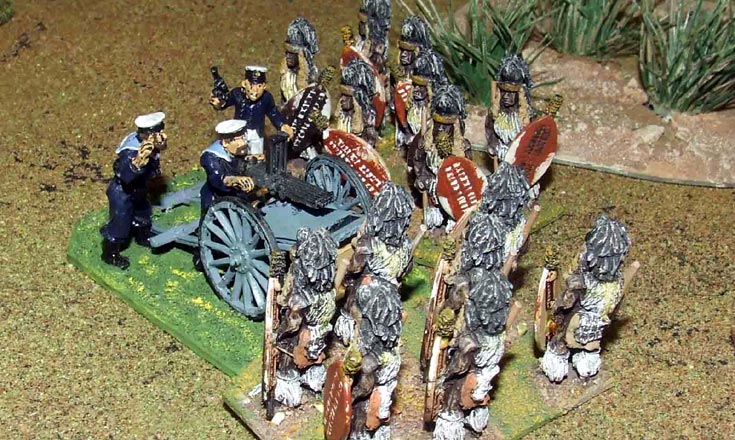 Misc., Darkest Africa, In the Heart of Africa, 28mm

Anyone who reads this journal will know by now that Chris Peers’ rules produce fun, silly games. One of the strangest of his rule sets is In the Heart of Africa. It works a little like Contemptible Little Armies / Back of Beyond, only there’s a lot of pleasing African “chrome”. The only thing which could make a game even sillier is if it used a scenario dreamed up by Edinburgh’s Colin Jack. Well, both he and Mr. Peers excelled themselves this week!

The rather strange premise was that there was a fort in the middle of nowhere, occupied by anti-slaving forces in British pay. A Zanzibari slaving column was heading its way, chased by a force of Belgians. A British gunboat was heading up river to rescue the garrison, while the locals – my He He tribesmen – were generally on the lookout for someone to skewer.

Inevitably the four groups were drawn towards the fort in the centre of the table. However, before anyone reached it the Zanzibaris and the Belgians came to blows, as did the British Naval Landing Party and the He He. The Belgians got the worst of a firefight with the Arab slaver askaris, and it soon became obvious that they weren’t going to bring the slavers to justice.

Meanwhile the He He launched an all-out charge against the British, who formed a thin blue line and tried to stop the tribesmen before they reached stabbing spear range. Despite the supporting fire of the gunboat the He He shrugged off their casualties and reached the sailors, and soon got the better of them in a bitter melee. The real heroes were the crew of the Gatling gun, who defended their piece until the bitter end. Still, the heavily outnumbered British were eventually wiped out to a man.

That really left three groups – the garrison, the Zanzibari Arab slavers, and the He He. By this stage the garrison had been badly whittled down by Arab musketry, and when the Zanzibari’s tribal allies charged the gate it seemed to be all over for the anti-slavery contingent. Then the He He joined the fray, cutting down many of the slaver Allies, using a combination of musketry and a captured machine gun (which promptly jammed the first turn it was fired). Still, as time came to pack up it looked like the Arabs were in the best position, having forced the gates of the fort, and manoeuvred themselves into a dominant position. They were duly declared the winner, with the He He coming a close second.

Another silly game, but one which was both colourful and fun. We haven’t played “Darkest Africa” for ages (can it really be over a year?),  so it was a delight to get these great figures out again, and to use them to produce such tabletop mayhem! We certainly won’t leave it so long until our next venture into Darkest Africa.

Tags: In the Heart of Africa