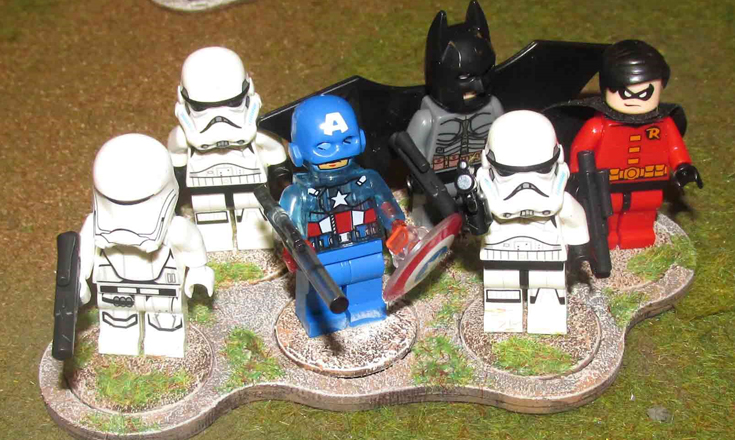 Sometimes you find yourself playing a game that verges on the ridiculous. This went far beyond that. I can honestly say that it was the silliest game I’ve ever played – more so than any Pulp game, or even “Cadillacs and Dinosaurs”. The thing is, several people at the club have been using Dragon rampant, and fielding fantasy armies. Derek Hodge went one stage further. On spotting minions on sale in a discount store he bought enough of them to make up an army. Not to be outdone, I bought some Lego figures in a charity shop, bolstered them with figures stolen from a toy box, and  so the scene was set for this – the dumbest game I’ve ever played!

It involved a 30-point clash between five units of Lego-men, versus six units of minions. Both armies contained a “great warbeast” (a Lego dragon and a giant minion), heavy foot (or minions), and in the case of the minions a unit of impetuous crazies or “mental minions” (that’s them below). For shock troops Derek had a minion chariot (actually a minion in a car), while I had King Emmett and his mounted knights. For firepower Derek had a unit with attached wizardlings, while my dragon breathed fire. I also had a missile unit, and a unit of elite foot (laser-armed superheroes and Imperial stormtroopers. So, let battle commence!

Derek opted to attack (it was an attack – defence scenario, with a river as the boundary), and he opted for a left hook. The motoring minion and the giant minion set off to hit my right flank, supported by the mental minions. I countered with my dragon, my heavy foot who looked suspiciously like Village People) and my missile unit (armed with crossbows and blasters).

The motoring minion proved surprisingly deadly, while the dragon and the giant minion clashed and rallied then clashed again until the giant was vanquished, and my dragon was on his last legs. A charge by Village People (below) saw him off, while the knights vanquished motor minion. Then disaster struck…

My Lego king and his knights were caught in a flank attack by the mental  minions, and wiped out. That prompted an army-wide morale test which saw off my dragon. My elite foot (that’s them below) kept getting zapped by the magic minion, whose spells of pinning my unit were interspersed with lightning bolts. Eventually my superheroes cracked under the pressure. Still, Derek had a vanquished unit too many, and more went when his army-wide morale test came around. We were now down to two units apiece – and that damned wizard saw off my missilemen. There was nothing left for it by a futile last charge by the Village People, who went down in a welter of blows from the mental minions. So, Derek won – just – but it was touch and go at times. that said, the game was utterly idiotic – and rather fun. Will I play it again? Possibly.. the Lego-men want their revenge.