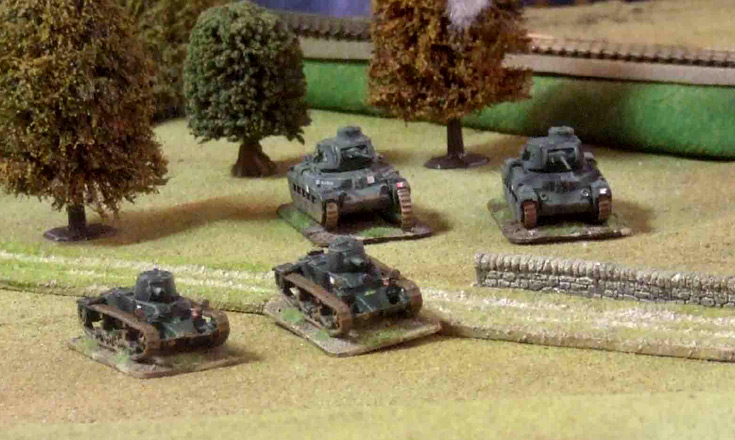 This was another of those scenarios from Dave Brown’s Battlegroup Panzer Grenadier scenario book. We’ve been meaning to play this one for ages, but we had to wait until we had enough German trucks. I don’t know why really – most of them were brewed up within the first few turns!

The scenario focused on the British tank attack south of Arras on 21st May 1940, and pitted a force of British infantry tanks (Matilda I’s and Matilda II’s) against a column of German panzergrenadiers – all from Rommel’s 7th Panzer Division. When the tanks broke cover and crossed a railway embankment the Germans were spread out on the road, and for a few turns the British had a field day, machine gunning trucks and their occupants before the Germans could react.

Well, the good times rolled for a bit. One by one the German 37mm AT guns were overrun, and infantry was machine gunned as they ran for cover. Then the German tanks appeared. While all the six Matilda I’s were just armed with machine guns, the Matilda II’s were sent to stop them. While their 2-pdrs. didn’t really inflict much damage on the Germans, their armour kept them out of trouble.

Meanwhile the German artillery had deployed, and started firing at the British over open sights. One Matilda I after another was brewed up, and the great British offensive slowly ground to a halt.

The final straw came when the Germans deployed their 88mm flak gun – a weapon which the British had no answer to. With tank losses reaching over 50%, the British decided to call it a day. In fact, the game pretty much followed the events of that day back in 1940, where the British were slowed and finally stopped by German gunners, Stukas and Flak crews. Still, it was a particularly well-paced game, and everyone agreed it was pretty evenly matched.